Geophagia is the practice of eating dirt and is a historic practice throughout the world. There are a few reasons why people eat soil, including clay, and it is a common practice among pregnant women or anaemic people on the continent. It is thought to be an indication of calcium and iron mineral deficiency in the body which results in cravings for mineral rich soil. It is not entirely clear what or if there are actually any nutritional benefits to eating clay as a mineral supplement and you are encouraged to speak to a medical professional about any nutritional deficiency you may be suffering from during your pregnancy (and indeed for other reasons) and get appropriate medical advice.

While most people only crave clay while there are under some kind of malnutrition, a subset of people experience a disorder called pica which is charactersied by the compulsive consumption of non-nutritive substances like chalk, stones, cloth, paper, ash, ice and hair despite not being pregnant or anaemic. Pica is quite common in children which they typically grow out of but can persist into adulthood and it is unclear what causes it.

If you enjoy eating clay occasionally or compulsively please be responsible with where you source it as it can be contaminated with chemicals and biologicals that leach into the soil. Avoid eating it in excess as it can lead to gastrointestinal problems and dental damage.

Aspalathus linearis is the scientific name for the plant used to make rooibos (red bush) tea and it is endemic to the Western Cape region of South Africa. It is appealing to some tea drinkers due to its caffeine-free nature and its more subtle and sweet taste.

The species is not under threat of extinction but due to commercial agriculture which utilises monoculture (the growth of one specific crop or crop variety) practices there has been a decrease in the variety of natural populations which can lead to reduced genetic diversity. Genetic diversity is important within any species to keep it healthy and prepared for ever changing environmental and biological factors such as new diseases.

While rooibos is now a global phenomenon it was first used by Africans in the Cederberg region of SA. Besides being a tea it is consumed in numerous other ways including ice cream of course and its use extends to the cosmetic industry as well.

Bidens pilosa (blackjack) is an invasive plant species on the African continent that is endemic to tropical America. It is a successful invasive plant across the world because of its sturdiness and how easily it can spread its seeds through human and other animal dispersal.

While the plant is heavily problematic as a weed in agricultural cultivation of crops the tender shoots of the plant are consumed globally and are an excellent source of beta-carotene and ascorbic acid, antioxidants and anti-inflammatory chemicals. While cultivation of the crop is discouraged, once it pops up as a weed feel free to harvest the leaves before the plant makes seeds as a way to get some nutritional dietary greens while also destroying an invasive species.The leaves can be finely sliced and sun-dried (known as mufushwa in ChiShona) for consumption at a much later time. Human consumption of the greens or absolute destruction of the whole plant through uprooting before seeding is the most effective way to deal with this vegetative pest.

When served in ice cream form the taste is reminiscent of matcha (green tea), liquorice and condensed milk with a herbaceous finish.

Maputi are a salty snack eaten across Zimbabwe reminiscent of pop-corn but with a more savoury, caramel and nutty flavour profile. They are made by popping dried white maize seeds under high heat and pressure in a maputi cannon. Unlike popcorn these will not pop in your conventional popcorn maker or stove-top pot at home. Alternatively, you can dry roast the maize seeds in a pan on a hot fire and the kernels will cook through and crack somewhat without exploding. This variation is also called maputi (or maputi akakangwa).

Maize and white maize meal have become synonymous with African cuisine and the plant is a daily staple food for millions across our lands. However, it should be noted the plant is a very successful invasive species (Zea mays) from Central America which adds a bit of a complication to how we cultivate prepare and consume it. Maize requires a lot of water to grow as it's evolved in the Americas and is actually not an ideal crop to grow on most of continental Africa. Secondly, the way the Mexicans process maize before consumption through a process called nixtamalisation makes nutrients more readily available for digestion and uptake into the body, a process we did not completely inherit when it was brought across and consequently it is a unacceptable nutrient source (when inadequately prepared).

Ironically, most of us prefer the refined and more aesthetically pleasing, white maize meal which is essentially just sugar instead of the more nutritionally sound, "wholegrain" maize meal that has more protein, fats and vitamins. If you have to eat maize instead of any other local grains like millet, go for wholegrain maize meal, or maputi for sure. 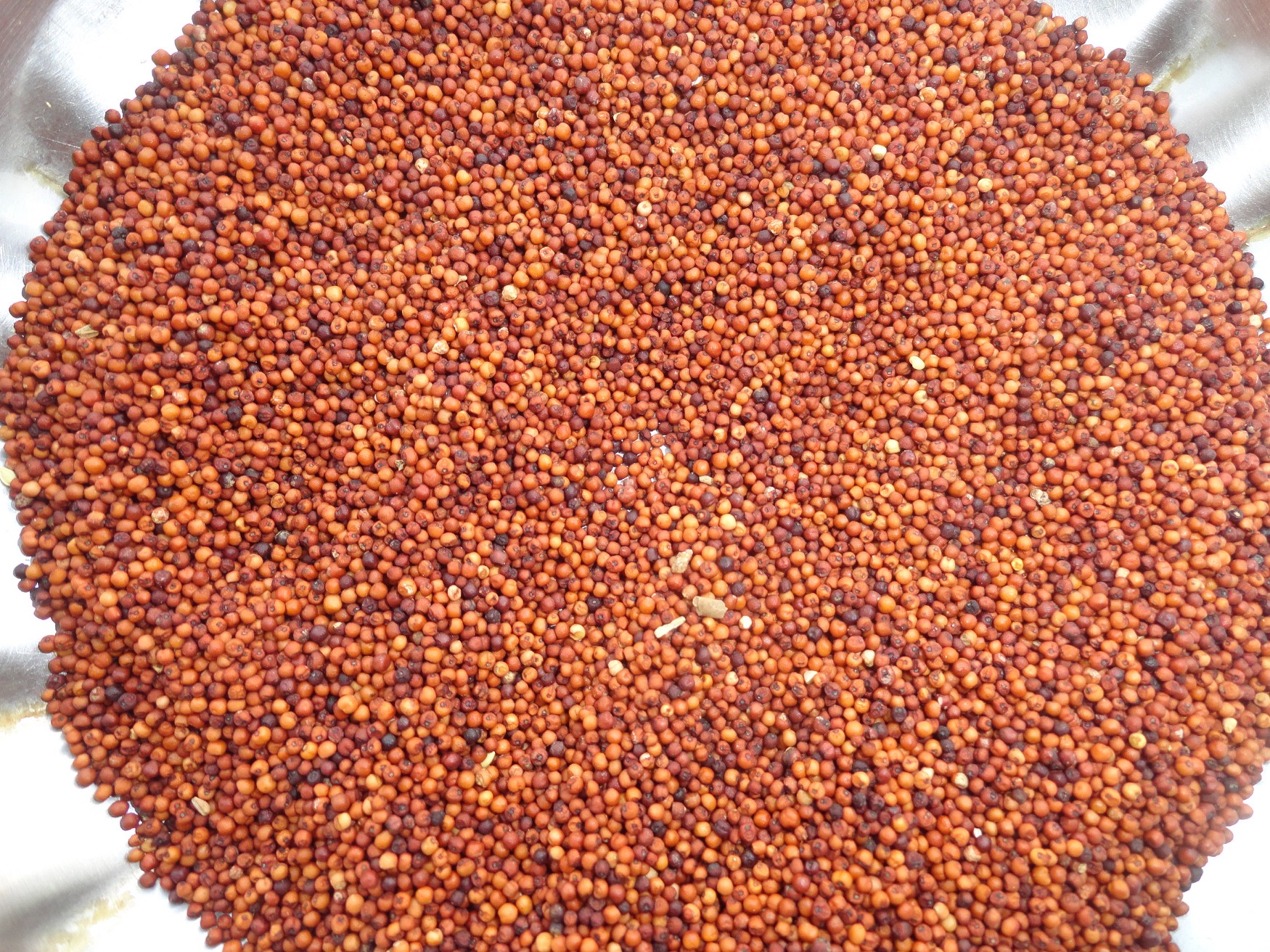 Millet is the generic name for different species of the plant family that includes pearl, finger, foxtail, barnyard, kodo and hundreds other millet species and varieties. Eleusine coracana subspecies africana is one of the species that has evolved on the African landscape and it generally considered more nutritious than other grains such as wheat and barley. Additionally, it is great for food security in arid regions as the seeds can keep for up to 5 years while maintaining their nutritional value and resisting insect attack.

There are numerous varieties of finger millet (and millet in general) and some species have evolved separately in India and other parts of Asia and the grain in consistently used in cooking breads, cakes, variations of porridge and breakfast cereal. When malted (chimera), millet flour can be fermented in combination with other grains or starches to make alcoholic and non-alcoholic beverages such as mahewu and umqombothi.

Our ice cream has a malted chocolatey finish to it with a nutty undertone and works wonderfully when paired with a more sweet scoop or when served in our hand-crafted millet sugar cones.

Musika (tamarind) is a sweet and sour legume from tropical Africa that is eaten as fresh fruit or used as a spice in cooking and beverages. It is so commonly used in Indian and Asian cooking that most people mistakenly are unaware of its African origins. There is only one species of tamarind in the world, Tamarindus indica and in addition to being a fruit, oil can be extracted from the seeds and the pulp is known to be good for human gut function and is used to polish metal finished products.

Koesisters are a Cape Malay, deep-fried sweet dumplings that are leavened using yeast and spiced typically with cinnamon, ginger, cardamom and aniseed. After frying they are briefly boiled in a spicy syrup and rolled around in desiccated coconut before serving. They are enjoyed any time of the year but are a special part of Sunday morning rituals across the Cape (Cape Town) as kids are sent to the local aunty to buy a fresh batch for the family. Family recipes are varied and are often a source of contention as each family or region or neighbourhood will proudly hold on to the claim to "the best koesisters in all the land". It is important to note there is a difference between koesisters and koeKsisters which are not spiced at all and are often twisted or braided.

At Tapi Tapi we have interpreted this Cape classic into a few different ice cream variations:

Check out our opening times and location and pop in for a visit to taste some of these phenomenal flavourites.